Those of you who live in a home built in the last six or seven years may have noticed a large balloon-like tank connected to the piping near your hot water tank. This device is known as a thermal expansion tank. Its purpose is to protect your household plumbing in the event of a pressure increase brought about by the heating of the water in your hot water tank. To understand why this might happen we need to first look at how the plumbing in your house connects to the water main in the street (See Figure 1). Water is delivered to your house through a service line. Before the service line enters your house it passes through a meter pit, which is usually located in your front yard. The inside of the meter pit contains a small check valve that prevents water from moving from your house back into the water main. Such an occurrence might happen if the main were to break, causing a local depressurization of the distribution system. The check valve prevents any possible contaminants from entering the main where they might affect other users on our system. 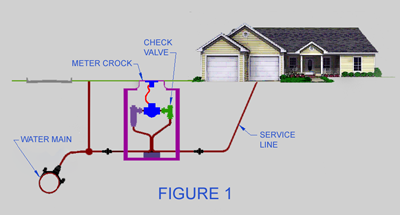 One of the physical properties of water is that the volume increases when it is heated, such as with your hot water tank. To appreciate how much it will expand; the water in a typical residential hot water tank holding 40 gallons will increase by about a half a gallon when heated to 70 degrees Fahrenheit. However, if the water is restrained from expanding by the plumbing the result will be an increase in pressure. The resulting pressure can be enough to damage your hot water tank or plumbing. Some people might have noticed that they don't have a thermal expansion tank and have never had any such problems. If there is no check valve in your meter pit then your plumbing is unrestrained. The volume expanse brought about by your hot water tank will simply expand back through the meter and into the water main. Because the water is unrestrained, there will be no increase in pressure. For houses that do have a check valve in the meter pit the potential for trouble is much greater, but you may still go several years without experiencing any problems. There might be several reasons for this: 1. While your hot water heater is running, the pressure in the tank and plumbing is increasing slowly. If at any time you open a faucet, such as to fill a glass with water, the pressure is instantly relieved. 2. The increasing pressure might cause a small leak at a fixture, such as a toilet or faucet, causing it to run or drip until the pressure is relieved. 3. If you stop using water before the hot water heater is done running the pressure may still increase, but not by enough to be noticed. So what happens if the pressure is not relieved? Hot water tanks contain a pressure relief valve to protect them from rupturing under such a scenario. The relief valve is typically set at 150 PSI, although this may vary among manufacturers. The valve opens when the tank pressure reaches the valve set point. After enough water has passed through the valve the pressure in the tank drops and the valve closes again. The concern of depending on these valves is that sometimes in older hotwater tanks they might be plugged with scale or corrosion and not function properly. For this reason, a thermal expansion tank is recommended. The basic objective behind a thermal expansion tank is to give the expanding water a place to go so the increase in pressure brought about by heating the water will be controlled. It is important to note that even with a properly selected and installed thermal expansion tank the plumbing pressure will still increase, but not by enough to cause a failure in the plumbing system. 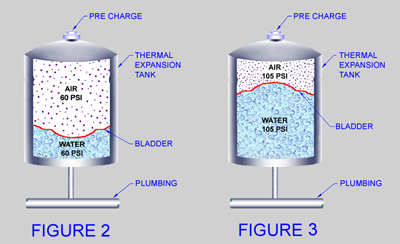 Sizing a Thermal Expansion Tank Boyles Law
To understand the inside of a thermal expansion tank a quick review of Boyle's Law is in order. The chemist Robert Boyle described the basic relationship between the pressure and volume of a confined gas in the seventeenth century. The law states that the pressure times the volume of a fixed mass of gas at a constant temperature is a constant. This is expressed mathematically as: PV = Constant Where: P = Absolute Pressure V = Volume If the volume of that gas is reduced by compressing it without subtracting any gas there is a corresponding increase in pressure. The product of the pressure and the volume of a gas is the same after it is compressed as it was before it was compressed; This is express mathematically as: P1V1 = P2V2 = Constant Thermal expansion tanks have a rubber bladder that separates the interior into two parts. One side is filled with water and the other with air. Initially, the tank is pre-charged with air before it is installed on the cold water side of the hot water tank. After it is connected and the water is turned back on, water will flow into the tank pushing the bladder toward the air side until the air pressure equals the household water pressure. This is shown in Figure 2, which assumes the household pressure is 60 PSI. Please note: Your household pressure varies depending on where you live. Boyle's Law is applied to the air side of the tank. When your water is heated it expands causing it to flow into the thermal expansion tank. This will further push the bladder toward the air side, reducing its volume even more and increasing its pressure according to Boyle's Law. At some point equilibrium will be obtained at a new higher pressure. In the example of Figure 3 this is shown as 105 PSI. Of course, all this assumes that the plumbing system is drip tight and no one uses any water during this time. If a fixture were to be opened the excess pressure would be relieved bringing it back to the normal household pressure of 60 PSI.
Tankless Hot Water Heaters
If you have a tankless hot water heater there is still a small amount of heated water stored within your plumbing system. Therefore it is the recommendation of Del-Co Water that you have a thermal expansion tank installed inside your home. 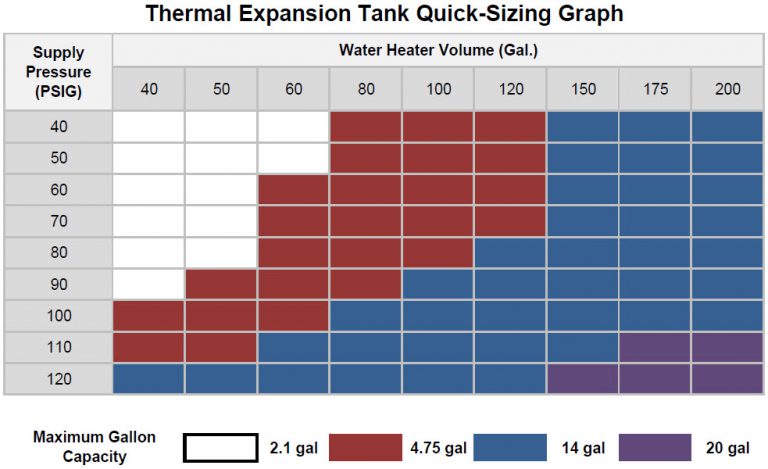